What is the Best Creatine Supplement? — The Fit Father Project Out of all the performance enhancing supplements, creatine is the one that stands to benefit almost everyone.  This article covers the basics and benefits of using creatine, how to properly use it, and the best creatine for your specific needs.

Before getting too deep in the weeds, let me take a moment to introduce you to the Fit Father Project.

To call our mission a success would be an understatement. Our most popular programs, FF30X and Old School Muscle, have helped thousands of men lose fat, gain muscle, and regenerate confidence. 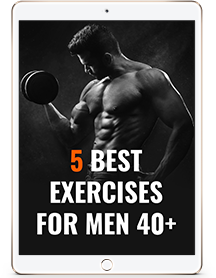 What Are The 5 Best Muscle Building Exercises For Men 40+?

The secret to building age-defying muscle in your in 40s, 50s, & 60s is to modify the best muscle building exercises (bench, squats, rows) to make them safe on your joints…

The cells in our muscles require a number of different compounds to operate. One of the more important substances is something called Adenosine Triphosphate (ATP).

ATP provides energy to the muscle cells, allowing them to contract and function properly.

Creatine is an organic compound that is similar to amino acids.

Your body can produce creatine using the amino acids glycine and arginine.

When creatine is present in the body, it turns into creatine phosphate, which takes part in the production of ATP.

Creatine is naturally found in all meats. It is most abundant in wild game, red meat, pork, poultry, and fish.

Creatine is also present in eggs, dairy, and shellfish, but in lower amounts.

How Does Creatine Work?

Having a steady supply of creatine available increases the production of ATP in your body, which enhances the performance of muscles in a number of ways.

The benefits of creatine are most noticeable when used in conjunction with explosive exercises or intense workouts.

Using your muscles for short bursts of power will cause them to consume abnormal amounts of ATP. Taking a creatine supplement ensures you have plenty of ATP available when it is needed the most.

Creatine also floods your muscle cells with water, making them look fuller and more bulky, but more importantly, the additional water helps the muscles function properly and increases the availability of energy.

What Is The Best Creatine?

Creatine's impact on physical performance has been well known since the early twentieth century, but its popularity has dramatically increased since it came into the public view in the early '90s. At that time, there were little to no commercially available forms of creatine. Today there are thousands of brands offering multiple product types, all claiming to be the best creatine.

However, if you're searching for the best form of creatine, you can't be fooled by marketing gimmicks. Because the research has been so favorable towards creatine monohydrate, it is considered the most effective creatine by both athletes and scientists.

Because creatine is synthetically created in a lab, the manufacturing process is one of the most important determinants in terms of purity of effectiveness. Poor manufacturing standards and additives can easily ruin a good supplement.

While there is some evidence that suggests other forms of creatine can be as beneficial, there have also been studies that contradict that claim.

Everyone's body is different, which is why the science behind supplementation is so murky. If you're not getting what you expected from creatine monohydrate, it might be worth your while to try one of the other types. As with most supplements, what we claim to be the best creatine, may not necessarily work for you.

With that said, the general rule “if it ain't broke, don't fix it” should still be in play here. However, these claims have been discounted in studies.  One of the supposed benefits of CEE is that it decreases the muscle bloat common with creatine monohydrate. However, the bloat is one of the reasons creatine works so well.

Because CEE has been studied and shown to be less effective than creatine monohydrate, we recommend you avoid it.

Buffered creatine is a patented form of creatine that contains magnesium or other forms of ‘buffering’ agents. The most common brand of buffered creatine is Kre Alkalyn, and while their claims are significant, the research behind it is not.

Numerous studies have been conducted testing the effectiveness of buffered creatine vs. creatine monohydrate, but I was unable to find any that showed a clear difference between the two.

Creatine HCL is a form of creatine that's designed to be more water soluble. The intention behind it is to increase the amount of creatine your body absorbs. While there is some promising literature on the subject, there are currently no peer-reviewed studies comparing HCL to monohydrate. A chelate is a compound that's bonded to a metal atom at more than one point through a chemical process. Creatine magnesium chelate is a form of creatine that has been chemically bonded to magnesium.

As with other types of creatine, the CMC attempts to reduce the degrading process of creatine in the stomach. Because magnesium is an alkaline compound, CMC is thought to counteract the acid levels in the stomach, and thus increasing the amount of creatine going to your muscles.

While many of these products have attempted to improve the efficacy of creatine monohydrate, there is very little evidence to support their claims.

Creatine Monohydrate is by far the best creatine for the money.

All of the other forms of creatine are novel experiments. Many of the different products have little to no scientific evidence to back up their claims.

Creatine Monohydrate is the form of creatine that is most prevalent in research studies.

The supplement has also been around for a while, which means there is a good deal of brands and products available. It also means there is a strong likelihood that creatine monohydrate is safer than the lesser known types of creatine.

If you haven’t experimented with creatine before, you should undoubtedly start with a good brand of creatine monohydrate.

What is the Best Form of Creatine Monohydrate? Creatine monohydrate typically comes in the form of powder to increase its shelf life. The manufacturing process synthesizes creatine in the form of salt crystals, which easily dissolve in water.

This process leaves us with a bitter tasting powder that must be ingested. Most people find ways to mask the taste, either by mixing it with a protein shake, or just a small amount of water, taking it all in a single shot followed by a chaser.

The Best Creatine is Typically a Powder

Some brands also offer creatine monohydrate in capsule or liquid form. You may find these to be more suitable because of the bitter taste of creatine. While capsules and tablets are generally considered just as effective as powdered forms, it might be worth your while to do some research before buying any of these products, as many of them could contain additives or unwanted ingredients.

Your best bet is to stick with the powdered form. It not only lasts longer on the shelf, which means it breaks down more slowly over time, but your body is also able to absorb it more quickly. Unflavored creatine in the form of powder should also not have any additives or unwanted ingredients, but be sure to check the label.

What Are The 5 Best Muscle Building Exercises For Men 40+?

The secret to building age-defying muscle in your in 40s, 50s, & 60s is to modify the best muscle building exercises (bench, squats, rows) to make them safe on your joints… The purest form of creatine is made in Germany, most likely due to the strict standards required for the pharmaceutical and food industries.

Our experience has also seen the most positive results from German brands of powdered creatine monohydrate. Look for “German Made” or the brand name Creapure on the packaging.

Don’t even waste your time with inferior products.

As far as specific brands are concerned, I would recommend trying one of the following.

To make the most of supplementation, we recommend taking 5 grams of creatine per day in conjunction with intense exercises and strength training. If you don't know where to begin, check out our free muscle building workout to get started.

Brotherhood Nickname: The Fit Brit
Bragging Rights: 18 Years in the fitness industry, Author of ‘The Easy Fitness Guide', Father of 4 boys and Husband to a Venezuelan beauty.

Only for guys 40+ who want to build muscle. 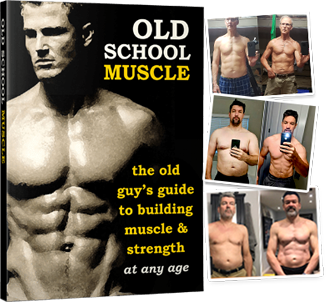 *Please know that weight loss results & health changes/improvements vary from individual to individual; you may not achieve similar results. Always consult with your doctor before making health decisions. This is not medical advice – simply very well-researched info on the best creatine.