Brian Nowicki is one of our favorite success stories here at the Fit Father Project. And that's not simply because Brian lost a massive 109 lbs over the space of just 9 months. It's his dedication to improving his health that we admire most.

This is Brian's story… from “Fat Dad” to the best shape he's been in over 20 years.

Like many guys, Brian was an active athlete back in his high school days. Brian played basketball for the Junior Varsity and Varsity teams.

Between his 2 hours of practice after school (followed by another 2 hours practice later in the evening_ meant Brian could eat pretty much anything and still remain at his ‘skinny' 170lbs at 6'4″.

As Brian shares: “…it didn't matter what I ate. I was skinny as heck. Videos of basketball games we watched next day at practice, I looked like a toothpick out there!

After High School, Brian found that he quickly became much less active. After Brian got married at age 23, his activity levels reduced to pretty much nothing and his weight slowly increased to 250 lbs.

This is when things started to slip.

When Brian's wife fell pregnant with twins, he found himself plagued with food cravings. While his wife was craving salads from Outback and ordering a full meal, Brian was polishing off the leftover servings of Steak and Potatoes.

At 28 years old, Brian was diagnosed with high blood pressure, which he needed to start taking regular medication to control.

His weight continued to rise throughout his twenties until, in his mid-thirties, Brian found himself tipping the 300 lb mark on the scale.

Brian: “…I kind of fluctuated up around the 300 pounds for quite a while”

At this point, Brian knew he needed to lose weight. He tried a number of weight loss methods, including Forskolin and other dietary supplements and pills.

Unfortunately, none of these methods worked. And after a couple more years, Brian's weight had crept up to 340 lbs.

That was the moment Brian realized that getting more active and watching what he ate was the only way to lose weight successfully. There were no shortcuts.

So, Brian started to exercise and eat better, and he ended up losing around 20 lbs in the process, getting down to 320 lbs.

However, with no real structure, accountability or support, he quickly slipped into old habits and his weight loss came to a screeching halt.

Brian: “…I just kind of fell off as there was no structure or accountability with it”

After falling back into his old bad habits, Brian's weight rose again.

In January 2017, caused by a difficult family issue, Brian started to stress eat.

2-4 weeks of poor eating, massive amounts of stress and absolutely no exercise caused Brian to reach his highest weight of his life… 362 lbs.

Brian: “My scale at home would not register that. I only knew that from when I went to the Doctor.”

This was Brian's “tipping point” and as he thought about his own future, he realized that if he continued down this path, he wouldn't live long enough to provide for his wife and kids and someday see his grandchildren.

Brian started searching online for an answer and it was there that he found the Fit Father Project.

Brian: “At one point I put a search in for ‘losing weight and getting fit at 43 years old' and Fit Father Project came up.”

Brian was skeptical at first but decided to provide his email address to receive the 1-Day Meal Plan. He started to use this and saw an instant improvement in his eating habits.

Along with getting the 1-Day Meal Plan, Brian also signed up to receive our free 24-minute fat burning workout.

With an improvement in his diet and a few days per week of exercise, Brian started to notice some weight loss success.

After using the free resources for around 3 weeks and successfully losing 20 lbs, Brian contacted Dr. Balduzzi and the FFP Team with some questions about the program. Here was his email to us below: Brian: “That personal thing is what put me over the edge to do it. If I wouldn't ever have gotten that response back from him [Dr. Balduzzi], I might not have ever done it.”

Having received Dr. Balduzzi's response, Brian decided fully commit and start the FF30X 30-Day Program to finally get his weight off.

Brian initially expected to lose around 15 lbs in the first 30 days of being on the FF30X Program. The encouraging results were enough for Brian to stick to the plan and move onto Phase #2.

His goal was to lose a total of 50 lbs over the first year and then a further 50 lbs in year two.

On phase #2, Brian enjoyed the change up in workouts and the continued support via the program and the private Facebook group ‘The Brotherhood'.

It was at this point, seeing him become ‘obsessive' about his workouts and eating plan, that Brian's wife knew he would stick to the program long term.

He continued through the first month of Phase #2, losing a further 20 lbs in the process and firing himself up further as he stepped into month 2 of Phase #2. This month also proved hugely successful, with Brian reaching 282.6 lbs. A truly fantastic weight loss of 50 lbs at the end of 90 days on our FF30X Program.

Since finishing the full 90 days of the core program, Brian has continued to use the habits he learned, to shed a further 59 lbs and get into much better shape and health.

He has added Tabata training into his routines, as well as additional core and ab exercises.

Brian sticks to similar meals each day, using the perfect plates method that is contained in the FF30X program.

He no longer drinks soda, but makes sure to drink water throughout the day… every day!

Brian has now been completely free from the blood pressure medication he was taking since age 28, for the past 3 months.

His blood work is showing much healthier levels of triglycerides, cholesterol and blood sugar, as you can see from Brian's update on the right.

Brian is an outstanding member of the Fit Father Project Brotherhood and has dedicated himself to the program and the principles we teach.

We are incredibly proud of this man. Brotherhood Nickname: The Fit Brit
Bragging Rights: 18 Years in the fitness industry, Author of ‘The Easy Fitness Guide', Father of 4 boys and Husband to a Venezuelan beauty. 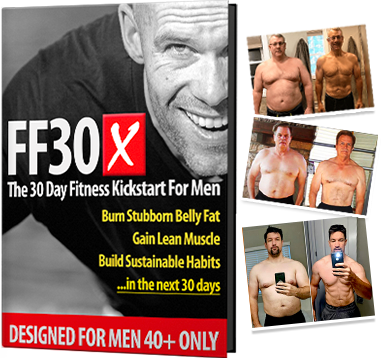 Join 22,000 guys in over 98 countries are using FF30X to lose weight. You get everything you need to succeed – including:
LEARN MORE ABOUT FF30X >> See the FF30X Program overview here. You’ll discover how this proven Fit Father Program can help you lose weight and actually keep it off – without the complication and restriction of normal diets. »

*Please know that weight loss results & health changes/improvements vary from individual to individual; you may not achieve similar results. Always consult with your doctor before making health decisions. This is not medical advice – simply a case study of what Brian has achieved.